Go to HIKING IN IKARIA

Go to HONEY FROM IKARIA

My Curriculum Vitae - Xenia Apostolopoulou
A few words about me 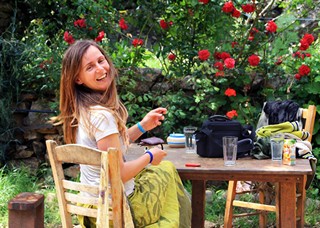 Ι was born in Αustria in 1975. My father is Greek and my mother Austrian. I spent my first childhood years in Austria and Germany and came to Greece, when I was 8. Before coming to Ikaria I worked with a homeopathist in Athens for 5 years and was attending botanical study and therapy seminars at the same time. In the past I also worked as a receptionist in hotels as well as a guide on several Greek islands. I also worked voluntarily for some NGOs in projects related to animal welfare. I have traveled a lot and have lived in many places of Greece. In September 2008 I left the chaotic urban environment of Athens and made my way to Ikaria in order to grow roots in a more natural place with people who were still authentic and not yet spoiled by tourism or over-development. Once in Ikaria I got various temporary jobs, until I decided to dedicate myself to apiculture and mountain guiding. I'm one of the founding members of Ikaria’s Hiking and Mountaineering Club (O.P.S.I) and a founding member and partner of KANGA. Besides Greek, I speak German, English and Spanish.

Friends & People who I cooperate with so as to make your experiences in Ikaria memorable...

Friend & fellow traveler
Angelos Kalokairinos is the eldest member from us & the one who has put the most effort by organizing the project of the network of paths & trails on the Island. One of the most experienced guide to the paths in Ikaria & an excellent history connoisseur who narrates true stories or fictional like fairy tales…

Friend & partner
Joey is a writing coach, ghostwriter, transformational coach and meditation facilitator. On Ikaria she organises retreats: unique combinations of writing, silence, meditation and dance. All her retreats have the same purpose: to bring about life-changing transformation.

Friend & partner
THE EGG is an international Venue in Ikaria, Greece, overlooking the sea from sunrise till sunset. In a private 600 m² open-air workshop area you can:
• Organize your own workshop, event, retreat or seminar.
• Make your holidays as an active participant in all attractions.

Welcome to WordPress. This is your first post. Edit or delete it, then start writing!